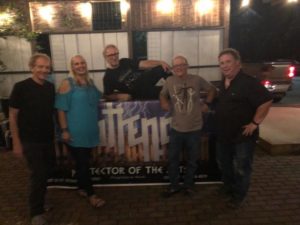 Tina Presley was born in Ohio and moved to Georgia in 1984. Her Mom and sister used to sing together, and somewhere along the way, she decided to give it a try.

When she is not working or singing, she enjoys being home with her husband and many animals.

Tina loves music with great harmonies and orchestration, with inspirations such as Moody Blues, Genesis, Eagles, Patsy Cline, Fleetwood Mac, and the Jefferson Airplane and (Starship). Was born in Ukraine. Thanks to his older brother, he started playing the guitar. From the age of 15, he played in a band with his school friends. Because of the lack of bassist started playing bass guitar. All these years he played in completely different groups of music. In 1996 he moved to Atlanta. After mastering the keyboard began to play jazz, with a pleasant voice by singer Tempe Otto. From 2003-2008 he played in Atlanta restaurants. Since 2010 he plays in different bands on bass guitar. Since 2017 he is in the rock group “Athena”.

(aka McRock): Growing up in Atlanta, Georgia, Brian started playing guitar at 10 after torturing his parents with drums as a small child.  He got his first electric for his 11th birthday and by the time he started high school at 13 he was playing shows in his first band.  By 14, Brian began writing his own songs and gigging regularly, playing many shows and festivals and touring as far away from home as Maryland.  There he began recording in professional studios and has continued doing sessions in many others over the years, mostly in Georgia.  After graduating high school, Brian continued song writing and gigging with his bands while attending Georgia State University as well as continuing in a variety of different studio sessions.
After college in the mid 80’s, Brian joined John, and Athena was born. Playing, writing and recording exclusively original material, Athena played many large festival shows around the southeast for several years until tragedy and a series of unfortunate events put the band into a long, dormant limbo.
Brian then found moderate success in the southeast for a couple of years after forming Black Widow. He continued writing and doing studio sessions while experimenting with various projects culminating in the formation of Mother Ocean, which grew quite a large following for a few years until disbanding late in 1990.
It was at this time Brian chose family life over the rock lifestyle and unplugged to raise his children. He loves being Daddy as much as his music. By the time his kids were teenagers, Brian’s desire for playing in a band was re-ignited by his close friend, Scott. They began jamming together regularly and gigging locally.
Then, the reincarnation of Athena… The band was reunited and reborn in 2010 to record their first full length album, Escape To Athena. They have since recorded and released their second album, Protector Of The Arts, in 2016. Athena is currently focusing on their live shows as well as writing new music for a third upcoming album.

grew up in New York. Being in the music business, his father was able to find excellent professional music teachers and at a very early age, John began taking Hammond organ lessons and learning classical music. While in High School, he began drum lessons and played in the marching band. He learned to play guitar as well by following some of the best guitarists in school playing their Fender Jaguars. John and some friends started a cover band called “The Sound” only to be broken up when everyone was sent off to college.

After college graduation, John started another cover band called Armand Road. He was the drummer in this band playing all around the southeast. It was then he began writing original songs. Never seeming to be able to find an adequate keyboardist with any good equipment, it was at this point John made the decision to switch to keyboards. This was the beginning of the original material band, Athena, with John playing keys as well as some guitar.
John’s current keyboard equipment list includes a Hammond L 1961, Roland MBK 1000 Midi Controller, Kurzweil PC2R Brain, Original Moog D, Kurzweil PC3LE Sampler, Suzuki Hammond XK3C, Leslie 147, 1962 Hammond A-100–C–B3, Moog Electric Blue. His guitars include a 1980 Hagstrom Swede, 1967 Hagstrom Viking XII 12 String and a Mosrite Special Edition. He also keeps a double bass set of Ludwig Stainless Steel Drums and Zildjian cymbals. His influences are many including the Beatles, Vanilla Fudge, Deep Purple, Manfred Mann’s Earth Band, Kansas, Rush, Heart, Pyotr Il’yich Tchaikovsky and, of course, Ludwig van Beethoven… to name but a few.

As a dedicated musician and songwriter, John plays all of these instruments every day. The left side of his brain never stops. Occasionally, he will let the right side sleep for a few hours.

was born in New York, NY, but was raised in Columbus, Georgia. He lost his father to cancer when he was 13 years old. Richard had a strong love for music and a desire to become a drummer. That summer, his mother bought him his first set of Ludwig drums. He was hooked from the start. Taking lessons over the summer with the goal of playing in the school band and orchestra, he soon began playing percussion in the marching band and symphony orchestra which he continued to do throughout high school.  At this time he also joined his first rock band with several classmates. The core of that group went through several personnel changes over the years and played all over the southeast as the Hats, Jeremiah, Ice and Fire, and the 13th Hourglass Band.

Family life put his music career on the back-burner for many years. Several years ago the itch to perform came knocking again. Several stints in a couple of local R&B/Jazz groups followed. In November of 2015 he became a member of Athena to help bring the music of Athena’s two previous albums to life for live performance.